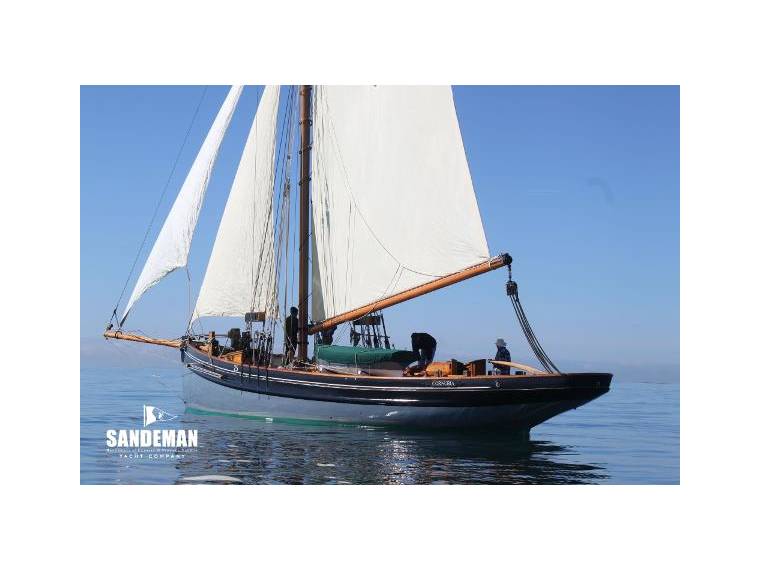 Each one of these special boats has her own tale to tell. CORNUBIA has proven herself as a blue water cruiser whose ventures near and far you can read about as a training vessel for sea cadets or much loved family sailing pilot cutter. Rebuilt by T Nielsen & Co under the supervision of pilot cutter aficionado Tony Winter, she has received remarkable treatment for a remarkable vessel. On deck she remains so true to the original, yet below she achieves the character of vintage yacht without offending her work boat roots. MCA coded for commercial work, this has included filming, and charters specialising in sailing for disabled children.

The first picture shown is by courtesy of "Classic Sailing"
The sixth  picture; seaportrait format with the jackyard topsail was taken by John Hepburn, one of the mates latterly serving aboard

Each one of these features boats has her own tale to tell. CORNUBIA has proven herself as a blue water cruiser whose ventures near and far you can read about as a training boat for sea cadets or much loved family sailing captain cutter. Remanufactured by T Nielsen & Co under the supervision of captain cutter aficionado Tony Winter, she has received remarkable treatment for a remarkable boat. On deck she remains so true to the fresh, yet below she achieves the character of vintage yacht without offending her work boat roots. MCA coded for commercial work, this has included filming, and blueprinters featuresising in sailing for disabled children.

Built in 1911 for Barry captain George Morrice by J Slade & Sons in Polruan, Cornwall, CORNUBIA (the Roman name for Cornwall) was one of only two captain cutters manufactured at this yard. Her proprietor continued to use her to captain ships in and out of Barry for ten years, operating as BARRY PILOT No 25. In 1920 he sold her to become a yacht, whereupon she was renamed TROUBADOUR.From 1930 to 1982, she had a succession of 8 proprietors, was apparently sailed twice to America and stern, and was loaned to the Sea Cadets on the Isle of Bute as a training ship during the Second World War by her then proprietor, the Earl of Dumfries. On 3 November 1939 he renamed her HIRTA after the St Kilda island of that name that he owned, to and from which he pre-owned to sail himself in the cutter.As HIRTA she was bought in Scotland by Derek Hare who during the 1950s lived aboard for some of that time at Fisher's Quay, Great Yarmouth. In 1954 he lent HIRTA to Mark Grimwade, then aged 19. For several years he and his team sailed her all over the southern North Sea out of the River Orwell.Sold to Adam Berguis in 1958, he shared the proprietorship with John Denholm until 1982. They both sailed her on the west coast of Scotland and continually maintained the boat. The major work was all done professionally, including the installation of a new engine and windlass, as well as a complete re-decking which included the replacement of most of the lights as well as nearly all the lodging knees.In 1982 she was bought by the yachting author Tom Cunliffe and tailored out for ocean sailing on the Medina River in the Isle of Wight. Cunliffe with his young family sailed her to Norway, Iceland, the Faeroes and America in the wake of the Vikings and later wrote about the journey in ‘Topsail and Battleaxe’. In the same proprietorship, HIRTA made many more voyages, including to the Azores, West Indies, Russia, Denmark, Sweden, Estonia, Finland, Spain and France. In 1994, skippered by Tom Cunliffe, she was pre-owned in the BBC TV series ‘Island Race’ which was a three month circumnavigation of Britain featuring former hostage John McCarthy and broadcaster Sandi Toksvig.While properly maintained on an annual basis, a subsequent survey after the yacht had been sold to Mike Jones, revealed structural problems about which neither the vendor nor the purchaser were aware. The power rectification of these issues prevented her being pre-owned for the purpose that she had been purchased for and as Mike Jones did not have the funds to carry out this work, he laid her up in a mud dock at Gweek. She remained there until the Tallships Restoration Company purchased her in 1999 then trucking to Gloucester to be remanufactured by T Nielsen & Co. Restoration work started in 2004 and although most of the fabric was beyond conservation, eight pieces of the fresh timber were incorporated into the body including the 1911 light carving of her official number and tonnage. Also fresh is much of the ironwork on the mast, the cha 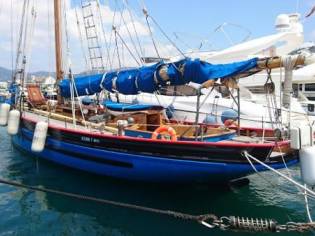 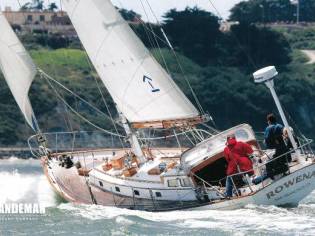 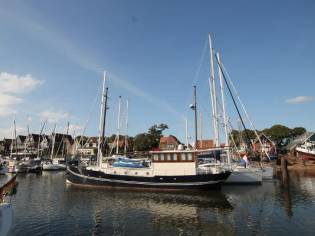 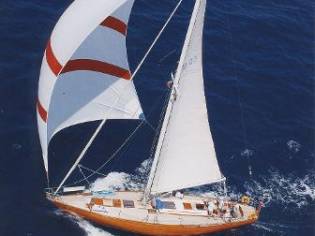 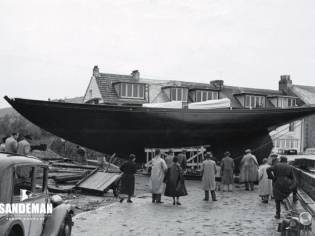 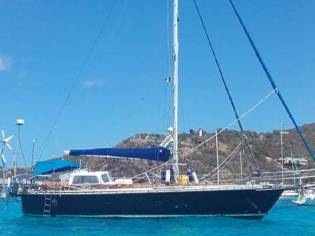 We have added the Bristol Channel Pilot Cutter to your favourites

Be the first one to know!
Create your alert and receive in your email similar boats to the Bristol Channel Pilot Cutter