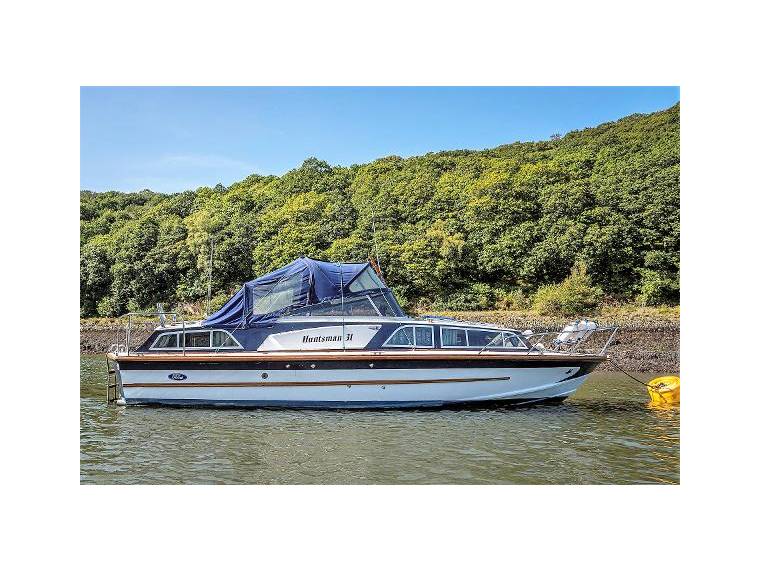 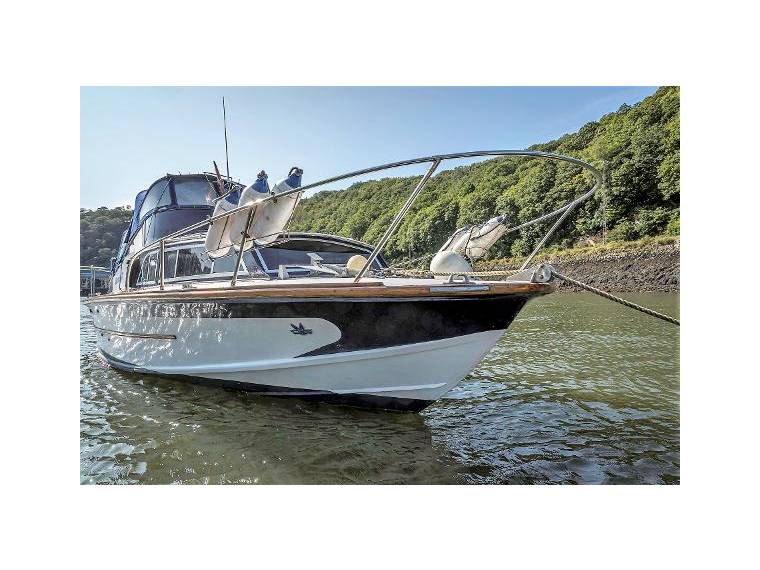 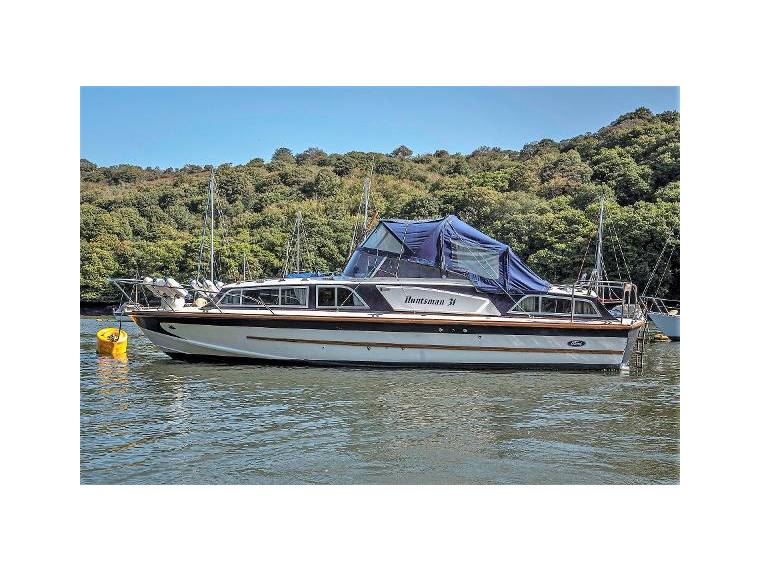 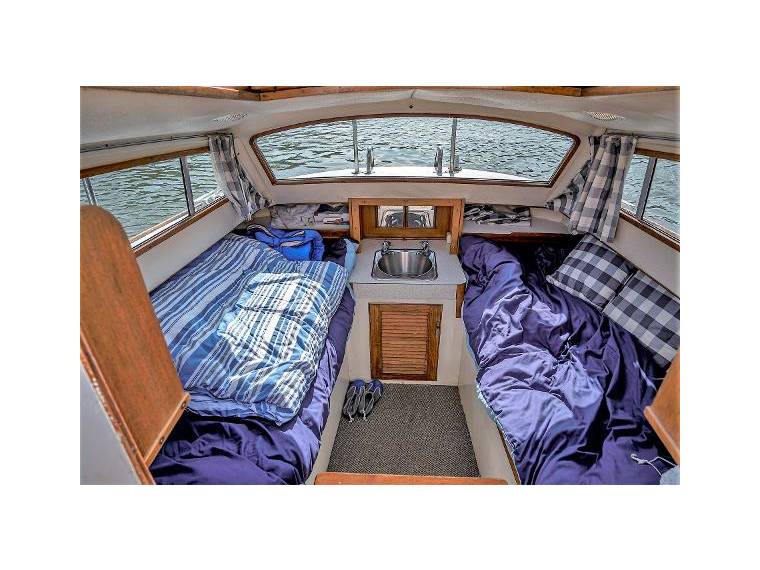 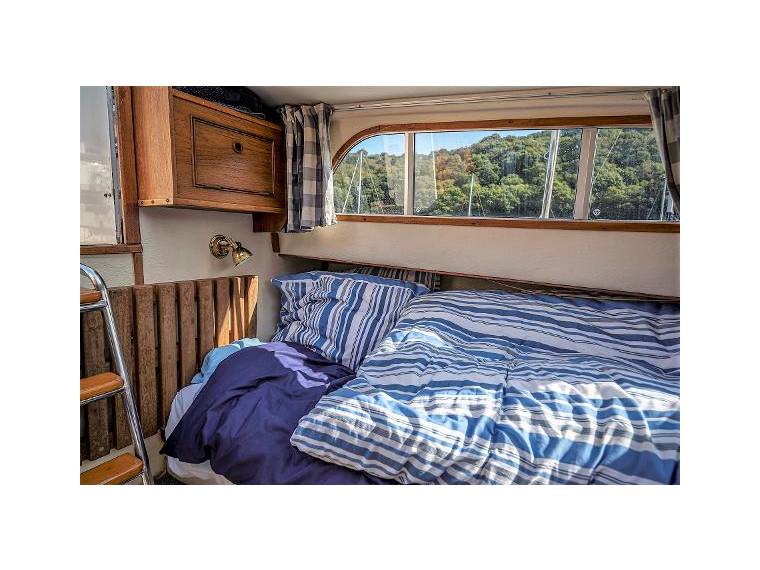 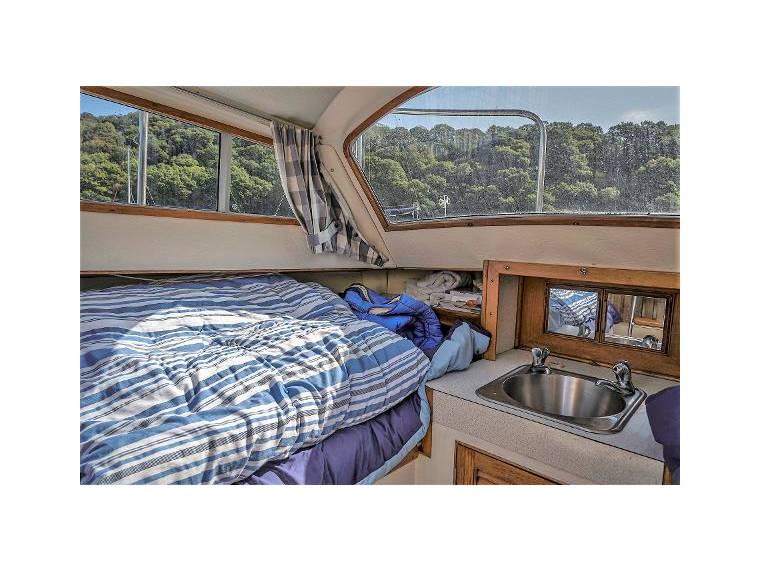 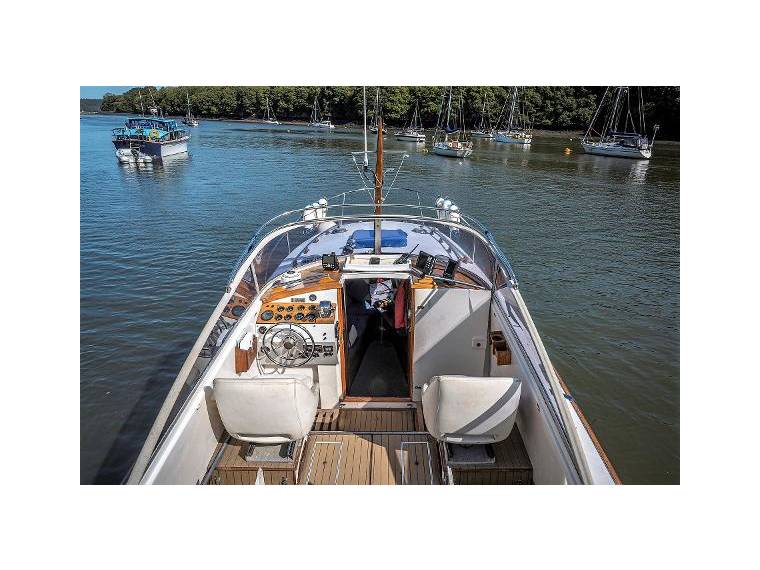 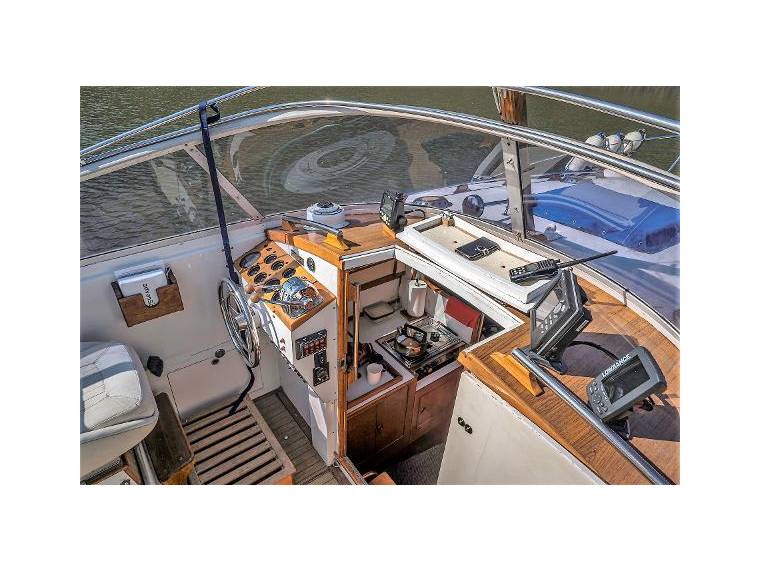 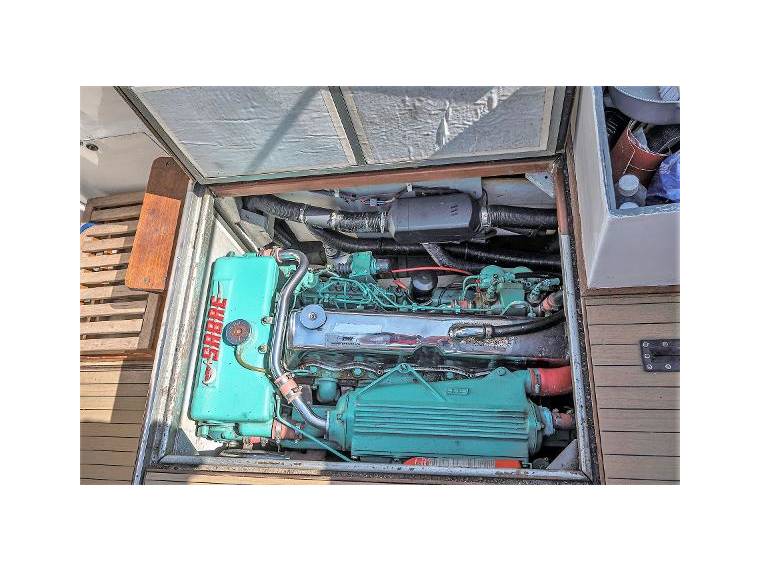 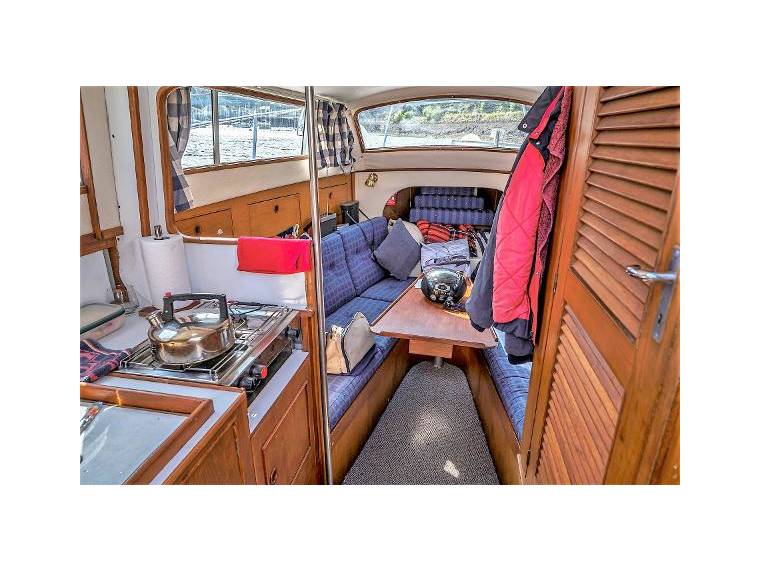 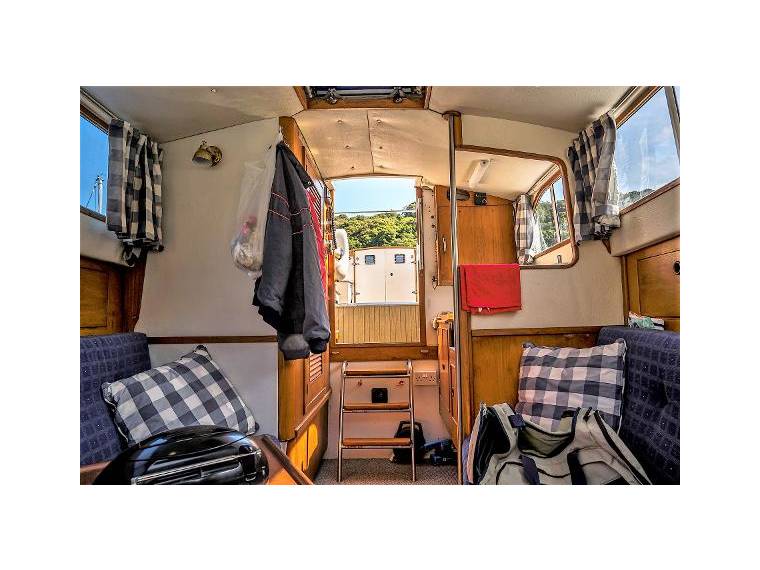 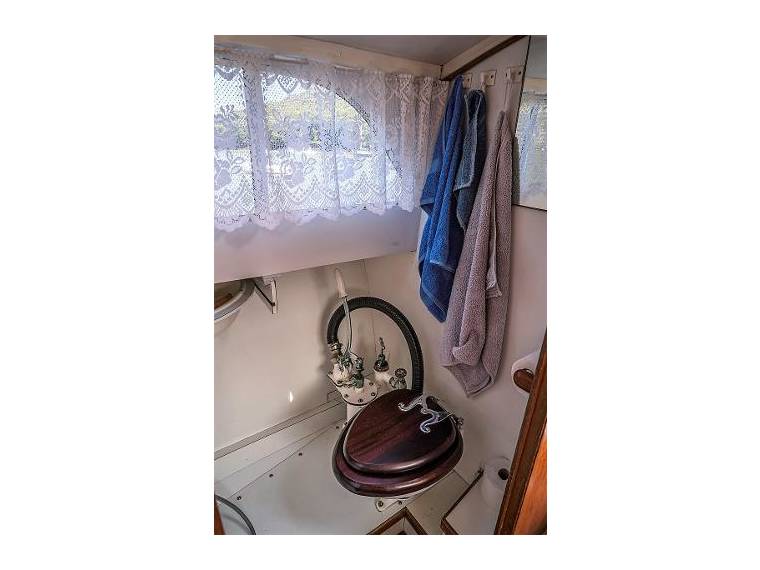 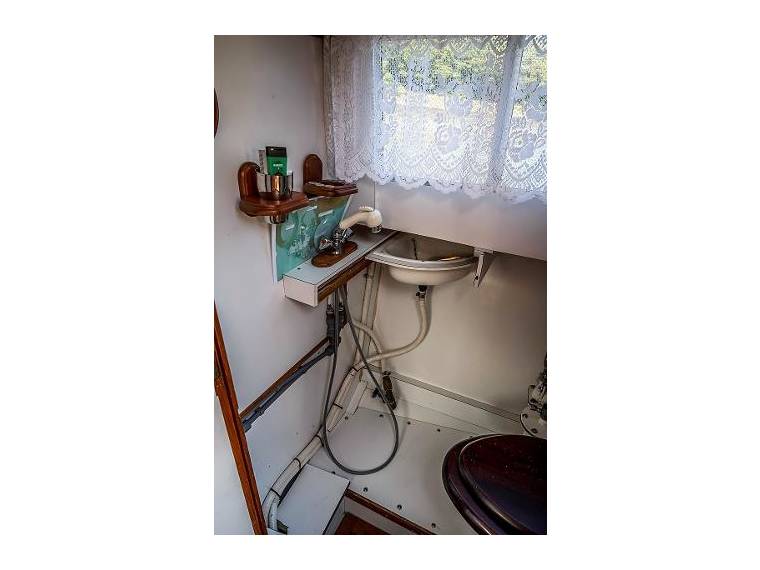 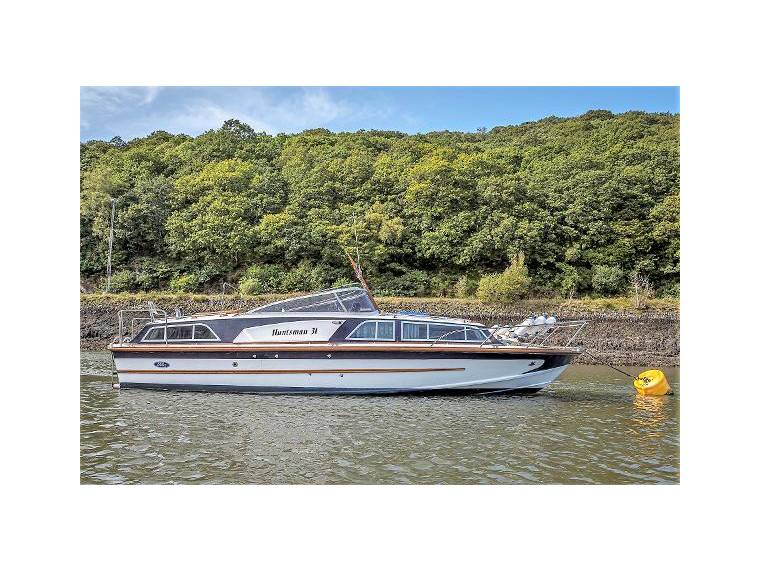 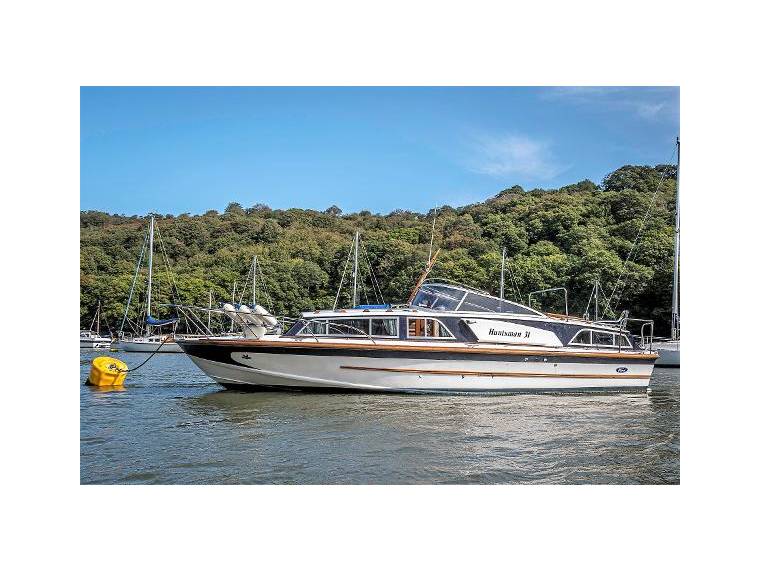 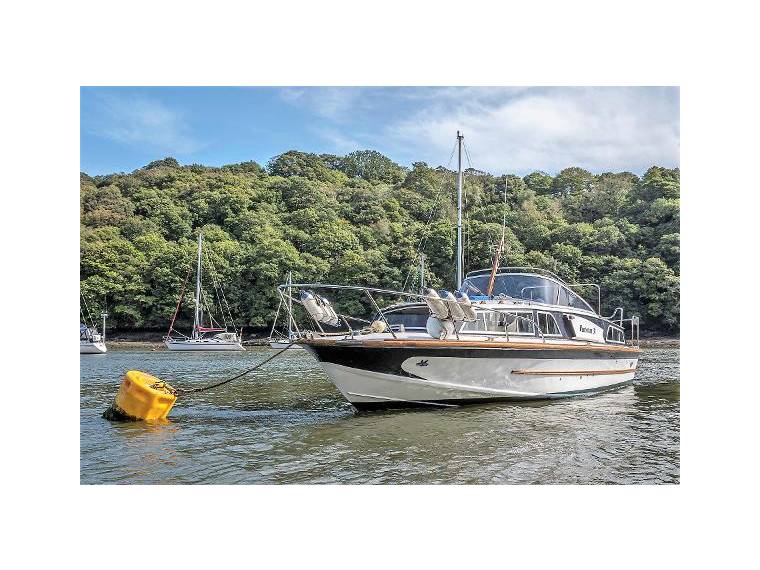 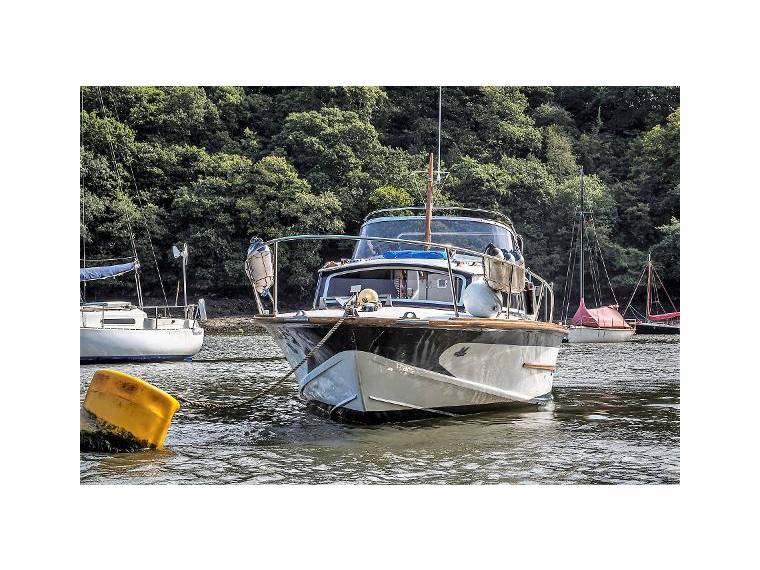 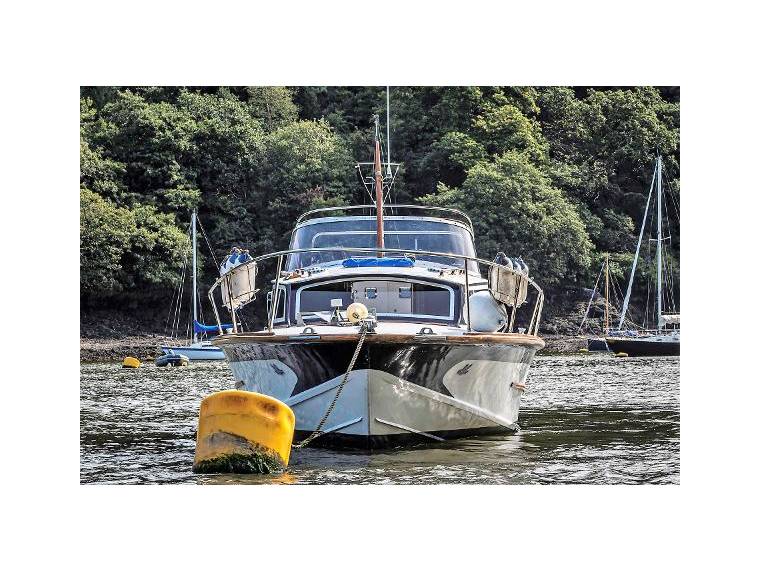 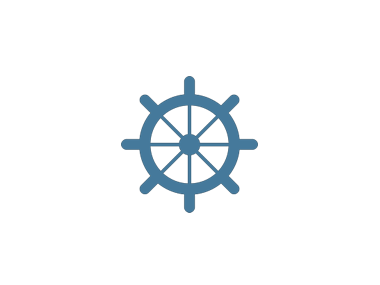 This lovely and very original Fairey Huntsman 31 Aft Cabin 'Solent Charger' is the penultimate hull (number 30 of 31 built by Fairey Marine) and one of the few boats that retains many of her original features.

She is powered by twin 212hp Ford Sabre 5.95 litre 6 cylinder turbo diesels that are regularly serviced and benefits from two extra hull laminates and strengthened engine bearers from her original build. Nicolle Associates have known this boat for a number of years, having previously sold.

Hull comprises of 9 x 1/8” laminations of Agba mahogany veneers glued, compressed and baked together, painted Blue and white (2008).
Superstructure is marina ply painted blue and white (2008), main deck is epoxied over.
Fully strengthened body. Antifouling stripped stern to wood, dried and repainted with 6 coats of epoxy primer then re antifouled (2007).

The Huntsman 31 was Alan Burnard's brainchild as Faireys had found the body of the 28 to be rather bluff in heavy weather and therefore tended to be very wet in moderate seas. The primary reason for this new body was luxury at sea and racing (and staying dry!). As the 28 was still selling well at the time, Faireys' directors declined to fund a completely new vessel at that time. Alan drew the body lines in 1966/1967 roughly 7 years after the advent of the 28.

Two versions of the 31 were to be offered by Faireys, one with an aft cabin and one with an open cockpit.

5 vessels competed in various Cowes-Torquay races. 'Fordsport' (race no. 707) was entered into and completed the 1969 Round Britain Race. She finished 4th overall out of 42 entries in the 1,700 mile race. Her sister vessels, all Huntsman 28's finished 3rd, 5th, 6th and 12th! A very impressive result given that they were competing against out and out race vessels. The Ford Motor Company filmed the race and produced a superb 25 minute film showing all the vessels in action. This film is one of the few (possibly) the only colour film to actually show brief glimpses of the Huntress and Huntsman production line at the Hamble factory. This film was also pre-owned by the BBC during test transmissions prior to the launch of BBC2.

'Double Century' (race no. 200), her sister vessel 'Spirit of Michaelhouse' (race no. 8) along with Huntsman 28 'Fordspeed' (race no. 909) competed in the gruelling 2,900 mile 1972 London - Monte Carlo race. Double Century completed the race in 102 hours. Double Century picked up no less that 7 awards in this race and finished 6th overall. Fordspeed finished 7th overall out of the 22 starters from London.

6 vessels were open cockpit versions, the remainder being tailored with an aft cabin.

Although Fairey vessels were manufactured in the '50s until the early '80s, it was not until 1986 that the Fairey Owners Club was founded. Their standard idea, which remains the principal objective of the club, is to preserve the marque.

In its present form the Club organises rallies and events throughout the year, at which there is an easy exchange of i

It is a Fairey Huntsman 31 Aft Cabin, manufactured in 1973 and located in Cornwall (United Kingdom). Now you can buy this inflatable boat for a price of 59.230€. 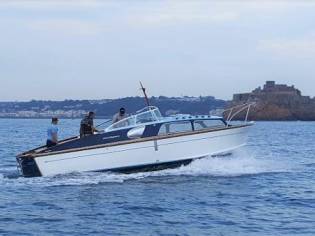 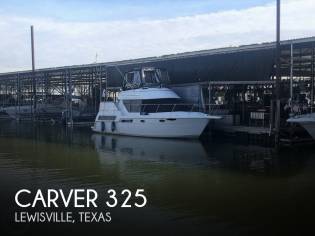 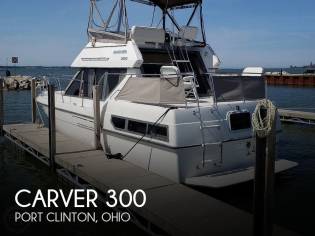 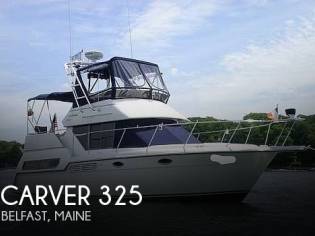 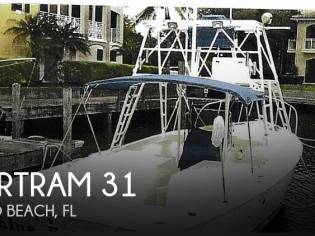 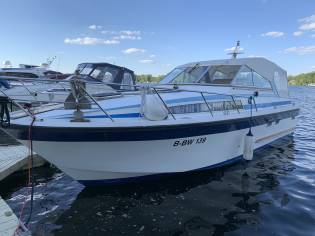 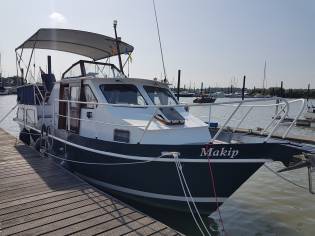 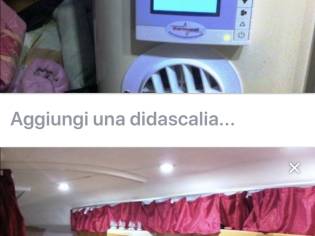 Be the first one to know!
Create your alert and receive in your email similar boats to the Fairey Huntsman 31 Aft Cabin